As a young girl, growing up in the late 80's/ early 90's with a mother who didn't question gender stereotypes (but did not enforce them at all, I had as much fun with Matchbox cars and Transformers as I did with Barbies) I had quite a doll collection. Some precious, like the porcelain doll my grandmother gave me for my 10th birthday (I still have her, she's sitting pretty in my daughter's bedroom), some not so much.

This little dolly is probably not worth much money wise, but she captured my imagination totally. And then one day she was gone.
It must have been after my mother cleaned many of my toys out of my room and into storage to make room for sharing with my little sister. To begin with I don't think I noticed, as I had somewhat outgrown her. But she was never forgotten, and I would occassionally begin to hunt for her before being distracted by something or other ("Off with the pixies!" my Scottish grandfather would proclaim).

After my daughter was born, I thought more and more frequently of that little soft dolly, I wanted my Bella to know the same facination I had known. When visiting my Mother one weekend, we instated a large scale search for the dolly. We had looked through all but one last lonely box, and I was hot, sweaty, sticky, and more than half convinced that my dolly had gone off with the pixies herself.

And then Mum pulled her out of the very bottom of that last box...
And here she is 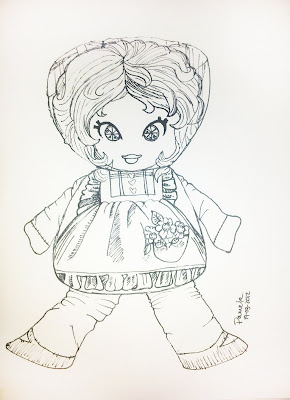 She may not look like much, she's just a rather retro looking little cloth dolly, but she has a secret, you see...
She changes. Like a book, you turn up the skirt of her dress and she has a new face, and a new dress. Four in all. I've never forgotten her.
My magic dolly.
Posted by Pamela at 12:02 AM