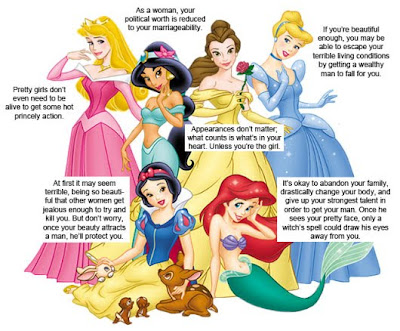 This is what I posted on Natural Papa's blog (http://naturalpapa.com/media/im-not-raising-princesses-i-guess/), as the whole anti-Disney Princess bit is funny, but in my opinion kind of sad.

There is real progression here. As you move along that list the heroines get feistier, they get bigger personalities, they get more independent.

Pocahontas: chooses to be a leader of her people, and to facilitate relations between her people and the Europeans, instead of following her heart with John Smith.
Mulan: Saves her father, impersonates a boy, joins the army, saves China, and yes, she gets the guy, but on her terms.
Giselle: Learns there is more to life than tiaras and princes, learns to stand up for herself, battles a dragon, DOESN’T marry the prince, instead ends up with the single dad.
Tiana: turns her nose up at fairytales, works hard at two jobs to save money for her dream, reforms the slacker prince, and yes she marries him, but their happily ever after isn’t castles and servants, its working in their own jazz club.
Rapunzel: kick’s the male protagonist’s ass (this is in the trailer, no idea what else goes on).

These movies are mirrors of their times, and the society that produced them. Are some of them dated? Of course. Does this mean they have no value? No. That would be like saying that Casablanca has no value, or Schindler’s List, or Gone with the Wind. They aren’t exactly brimming with positive female role models. They still have entertainment value, and they are historical texts. They show us snippets of our society and culture, and our technological achievements. I will allow my daughter to watch these films, as I will allow her to do most things that do her and her surroundings no harm.

If anyone has seen the last few Disney princess movies (Pocahontas, Mulan, Enchanted and The Princess and the Frog), and the trailer for Tangled, you'll see that Disney is getting with it, and making an effort to portray modern role-models for our daughters.

Having said which, I grew up loving Disney movies and it did me no harm (My favourites were Belle, because she loved reading books like I did, and Ariel because I loved swimming and thought it would be cool to have a tail). Unless you think annoying people by singing as I do the housework is harmful. Or worse, getting married and breeding (gasp!).

If you look at just about any character/story to pick it apart, chances are you'll be successful. Are the pictures above with their snide, witty little captions accurate? Not for me. Its all subjective. If you want to look at them as a jaded, cynical adult go ahead. I choose to look at Disney films through the beautiful rose tinted glasses of childhood. To this day these films fill me with a sense of delight and happiness that is often sorely missing in my very adult world. They are a perfect antidote to watching the evening news. As is looking at the world the way my daughter sees it.

My daughter can watch Disney movies when she's old enough to be interested, just as she can read Romeo & Juliet, or Pride & Prejudice, or any other romantic tale. She can read Plath and Hemmingway too when she’s ready. This will be her choice.

I do hope however, that she looks to the very real women in her life for role-models before she looks at fictional characters, just like I do. My mother raised 3 children on next to no money after my father's death (while she was pregnant with me), she overcame many hurdles including the death of my twin, my sister's kidnapping, and a brain haemorrhage.

We needn't look far for role models. I didn't and I doubt my daughter will.
Posted by Pamela at 12:43 PM